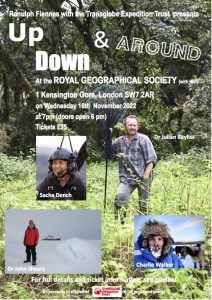 Up, Down and Around

It’s getting harder to think up new titles for our lecture evenings but with osprey and a sunken ship as well as Arctic tundra and Ethopian tropical forest, “Up Down and Around” seemed logical. As always we are extremely grateful to our speakers for sharing their stories. Charlie Walker set off on his travels across Arctic Russia never imagining that the country would so quickly be at war. Sacha Dench has been planning her flight with osprey for a number of years when disaster struck. Undeterred she has forged ahead with her plans. Julian Bayliss set off into an unexplored part of Ethiopia not knowing what he’d discover and John Shears went in search of Shackleton’s “Endurance” and found her 3,000 meters down. Another spectacular evening of adventure and entertainment.

Charlie Walker is an adventurer and writer from the UK. He specialises in long distance, human-powered expeditions to develop a more intimate understanding of some of the world’s most remote communities. Over his career, this focus has taken him to places as varied as the Tibetan plateau, the Mongolian steppe, the Congolese jungle, Arctic tundra, the highlands of New Guinea and numerous deserts in between. He has travelled over 50,000 miles by bicycle, foot, horse, raft, ski and dugout canoe. He is a Fellow of the Royal Geographical Society, a 2021 Scientific Exploration Society Explorer Award winner, and a three-time recipient of the Transglobe Expedition Trust’s ‘Mad but Marvellous’ grant. His work has been featured on the BBC World Service, BBC Radio 4, The Sunday Times, The Daily Telegraph and Geographical magazine. He has also written two books: Through Sand & Snow, and On Roads That Echo. In mid February, with the support of TET, Charlie set out on his 1,000 mile winter ski trek in NE Siberia. The harsh climate was not the only hazard he encountered in northern Russia!

Sacha Dench is a pioneering conservationist, record-breaking adventurer and inspirational speaker. As the UN Ambassador for Migratory Species and founder of Conservation Without Borders, Sacha’s real-world experiences offer a unique insight into sustainable procurement. Named ‘The Human Swan’ for her flight, supported by TET, from the Russian Arctic to the UK by paramotor to help save the migrating Bewick’s swan, the focus of her expeditions has widened. By using the birds eye view of the world Sacha focuses on the big issues of today. After her flight across the arctic, and losing her family home to the Australian bushfires, climate change research and solutions are an integral part of all of her expeditions and research. On her 2021 flight around the UK in an electric powered paramotor as part of the UN Climate Conference COP26, she was badly injured but, in Joanna Lumley’s words, ‘the human swan has arisen as the human phoenix’ and despite still having one leg in a frame, she and her team have set off on their next expedition following the migration of the osprey from Scotland to Ghana.

Julian Bayliss is a Conservation Scientist, an Ecologist, and an Explorer. For more than 25 years he has worked extensively across Africa. His work on Protected Area management and the creation and conservation of new protected areas ranges from forests to wetlands. He has also organised and led over 50 scientific expeditions in Africa and discovered over 20 new species to science. In May, with the support of TET, Julian set out to an area of tribal lands which have resisted modernisat ion on a reconnaissance of a little-known forested plateau in SW Ethiopia – the forest with no name!

John Shears is a veteran polar geographer and expedition leader. He has over 30 years of experience of working in both Antarctica and the Arctic, first with the British Antarctic Survey, then the Scott Polar Research Institute at the University of Cambridge, and now running his own polar consultancy business Shears Polar Limited. Since 2017, John’s polar expeditions have focussed on the search for the wreck of Sir Ernest Shackleton’s ship Endurance in the Weddell Sea, Antarctica. A quest called “the impossible search for the greatest shipwreck”. He was the leader of the Weddell Sea Expedition 2019, which failed to find the ship and lost an autonomous underwater vehicle during the search. But returned in 2022 as the leader of the international Endurance22 expedition, and succeeded in making polar history with the dramatic discovery of the Endurance at a depth of over 3000m at the bottom of the Weddell Sea on 5 March 2022. John is a Fellow of the Royal Geographical Society and a Chartered Geographer, and has worked closely with the Society on many polar educational projects. He was awarded the Polar Medal by Her Majesty the Queen in 2019 in recognition of his “outstanding achievement and service to the United Kingdom in the field of polar research”.