The 100,000-mile route took the Transglobe Expedition team across the Sahara via Tombouctou, through the swamps and jungles of Mali and the Ivory Coast, over huge unexplored crevasse fields in Antarctica, through the inhospitable North West Passage, graveyard of so many famous venturers, and into the unpredictable hazards of the Arctic Ocean. Ranking alongside the journeys of Amundsen, Scott and Peary the Transglobe endeavour, a chance dream in 1972, became, on its completion ten years later, a truly historic voyage.

Click on the menu links above for detailed information about the various stages of the Expedition. 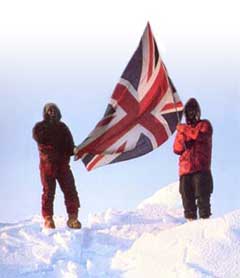